I've been collecting a few items of news, which aren't really worthy of a blog post all by themselves, but I have decided to put them together here.

Obviously, as much of the rest of the world is, I am appalled by Russia's invasion of Ukraine.

Before this invasion, I knew very little of Ukraine. On the other hand, I was surprised to find that if you rank my blog hits by country, Ukraine comes in 10th. This is almost three times higher than my own country, New Zealand! It won't come as a surprise that hits from Ukraine have all but disappeared since the start of the invasion.

The number of hits from Ukraine made me realise that there is a trans population in Ukraine which is trying to reach out across international boundaries. I took comfort from this--until I started reading. Until recently, being trans in Ukraine could result in you being institutionalised. Ukraine ranks 39th among the 49 countries in Europe for LGBT+ freedoms and rights. Gay marriage, for example, is still illegal.

Then I read stories like this one, which describe how transwomen attempting to flee Ukraine have been detained and turned back at borders. One transwoman, Zi Faámelu, describes in Rolling Stone magazine how she was repeatedly turned back at the border, because in Ukraine, military service is now mandatory for all males, and her passport still states she is male. Eventually she escaped by swimming across the Danube river into Romania. She is now living safely in Germany.

I can understand how the presence of war, plus a country just beginning to experience a little awareness and acceptance of rainbow people, is making life extremely difficult for trans and other rainbow people. But if Ukraine isn't friendly to trans people, Russia would undoubtedly be a lot worse. Russia ranks 46th on that list, and Vladimir Putin has described gender fluidity as "a crime against humanity".

One thing is for sure: the Ukrainians are showing that they are not willing to give up their freedoms and submit to the oppression and restrictions of Mother Russia. Hopefully once they send Mr Putin back to Moscow with a bloody nose, they can get on and grow in freedom and tolerance, as they have been over the last few years.

Ukraine has also won the Eurovision Song Contest for this year. As I've written before, the contest isn't so much a competition of musical talent as a sort of political popularity contest. This victory is definitely a message of support and encouragement from the rest of Europe to the people of Ukraine.

Meanwhile, to any Ukrainian people reading this blog, I salute your courage, and I hope that the war ends soon and you can rebuild your country.

As a doctor, I'd known that the World Professional Association for Transgender Health was a thing. However, because I was still being very stealth, I didn't really want to put my hand up, because I thought I might be traced, and that might be a "bad thing".

However, that's changed now. New Zealand has an affiliated branch of WPATH, called the Professional Association for Transgender Health Aotearoa, PATHA. I got in touch with them, and they were delightful. I've paid my membership fee, and Dr Vivienne Marcus is now a full member of PATHA.

I'm not sure what this will mean for my future. At the moment I'm just trying to cautiously reach out to the other members. It's that equivalent of slipping in at the back of the lecture theatre and hoping nobody notices you. But I'm confident of full acceptance from them.

What's not so clear is how I can contribute to the cause. I don't particularly look after trans people in my daily work. I don't think being a PATHA member is going to really change anything about how I do my job. What I am good at is writing and teaching, and I've explained that to the executive on my application. It remains to be seen what (if any) contribution I can make. I will certainly notify you of anything momentous I end up doing.

I can't remember where I first saw an animation of Lofi Girl, but it struck me immediately as being both pleasing and familiar. 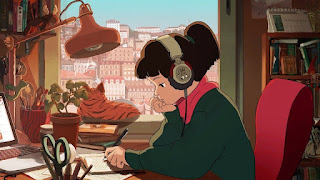 Lofi Girl is the name of a French YouTube channel and music label, which, which provides an endless stream of what Wikipedia calls lo-fi hip-hop, accompanied by an endless animation of a young woman sitting writing in a diary. The music is intended to be relaxing, background music, which can be used to accompany study, relaxing or other activity; in essence, audible wallpaper.

I like lots of things about this. First, I like the animation, which is clearly inspired by the sort of Japanese anime typical of the wonderful Studio Ghibli, whose work I adore. In fact, Wikipedia says they originally used a short segment from the film Whisper of the Heart, before being legally required to take it down. Since then, they have commissioned an artist to recreate an anime-like character (whose official name is Jade) to feature.

The Lofi Girl sits, looking thoughtfully at her book and writing by hand. She's listening through headphones (presumably to what we hear), deep in thought. From time to time, she pauses and looks up at the cat, which sits on the windowsill looking out of the window. Then she carries on. This provides just enough action for me to sit and watch it for hours. From time to time, the weather changes outside the window, and day turns to night and vice versa.

What I love about this is that she sits exactly the way I do. I love to write in my journal; I use a gorgeous fountain pen, and delicious inks from Jacques Herbin in Paris. And while Lofi Girl is a leftie and I'm not, I do sit with my chin in my hand while I write. And from time to time I pause and look up into the middle distance. Journal writing is my happy place; both an intellectual and a sensual pleasure.

Surprisingly, the part about Lofi Girl which attracts me least is the music. There's nothing particularly wrong with it, but I find it quite samey after a few hours.

Amazingly, the Lofi Girl website allows you to customise the appearance of the Lofi Girl and create a still image. So this is what she would look like if she were Vivienne--complete with dog!