Let me open this first post of 2022 by wishing all of you a very happy and productive New Year, and let me also hope that COVID-19, in whichever variant, doesn't interfere too much with your plans and your lifestyle.
I came across a cartoon this week on my Facebook feed*. It was drawn by Sophie Labelle at Serious Trans Vibes. She also has a Facebook feed called Assigned Male Comics. Some of her comics have been anthologised into printed volumes which are available from her website store in both English and French.
According to the Wikipedia page, the comics have been produced since 2014, and have received positive reviews from critics. Certainly she seems to attract very positive and supportive comments on Facebook, although she has also occasionally been the target of hate. From my perspective, the medium of comics is a very effective way of communicating transgender topics, and I've written about this before, here and here. 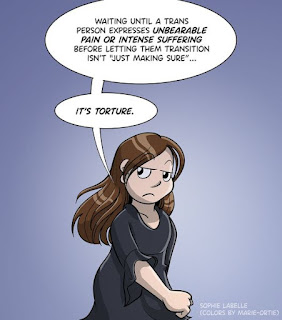 Here's the cartoon which caught my eye*. I hadn't come across any of Labelle's work before. I did not recognise the character depicted (it turns out to be one of Labelle's main characters, a young trans-girl called Stephie).
As of today, 15th January 2022, this cartoon has had over 6,700 likes, 172 comments, and 1,700 shares, although these numbers seem to be par for the course for Labelle's cartoons on Facebook.
But what troubled me about it was the implication that that doctors are deliberately obstructive to trans people; deliberately causing them to experience "unbearable pain or intense suffering"; and deliberately inflicting "torture" upon them. This view struck me as unfair and I wanted to explore it further.
Being both a trans person myself, and a doctor, I'm aware of the tension that exists between the two groups. I'm aware (of course) of the frustration that exists from trans people who cannot get doctors to listen to them, believe them, or treat them. And I'm aware (of course) of the antics which some trans people sometimes resort to, such as lying or manipulation, to try to get their way. Others resort to hormones they buy online, or travel overseas to get surgery.
And I want to explain why I think "gatekeeper" is very much the wrong metaphor for what doctors are doing.
There is definitely a problem
Before I go further, I want to state that there is definitely a problem in the medical treatment of transgender people. I am, in my professional and online lives, trying to help to put it right, and I have discussed this matter before on this blog, for example here.
I wrote a long comment on Labelle's page, attempting to explain a more balanced view. She deleted it, and posted this:

Labelle: got a few truscums who wrote 10 pages long comments on how gatekeeping is essential to be truly trans, I got to delete their comments before anyone saw them, as a morning treat! I hope they didn't save their essays anywhere and they're lost forever.