In the last couple of weeks I've finally come out to all my children.
This was a surprisingly difficult thing to do. Not because I didn't want to, but because there were significant obstacles in the way. Those of you who know me (and followers of this blog) will already know how much my ex-wife loathes cross-dressing, and how manipulative and obstructive she can be.
Without going through all the exhausting and tedious details (and there are many!) I managed to navigate the worst of her obstacles and finally do the Big Reveal.
Having been very careful in making this move has allowed several things to happen. It has allowed me to contemplate seriously, and for the first time, what my life might look like if I didn't have to hide who I am. For many years, I had to deal with a wife who told me how disgusting, how shameful, how unacceptable it is to enjoy wearing feminine clothing. This was very corrosive to my self-esteem.

During this time, hiding and pretending felt normal. It felt safe. It felt like a boat I didn't want to rock, because I was still very fearful of further negative consequences, and I didn't think I had the strength to weather them.
But the idea of no longer having to hide was beginning to take hold. Looking ahead, I could see light for the very first time--a light which I didn't dare to dream would ever shine on me. When my ex-wife's protests began to mount, the thought of moving backward was intolerable.
The Big Reveal
I've always found it amusingly ironic that a common metaphor for facing up to something difficult is to "put your big girl panties on". This was definitely one of those moments! 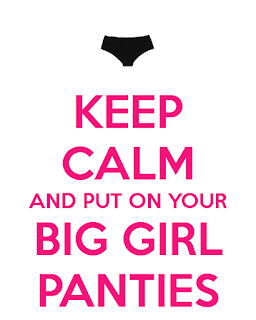 The star of the show was the eldest boy, in his late teens. He accepted it immediately and completely, and was so mature. He was the one I was most worried about, as he’s grown up believing his dad was an ordinary guy (albeit a geeky, scholarly one), and I wasn’t sure how he would take the news.
The one I expected would be no trouble was the eldest girl, in her middle teens. She’s very “woke”, very pro rainbow people, and has often made statements in support of minority causes. Although she also wasn’t expecting this announcement, I thought she was the one “primed” to be accepting. Instead she was quite upset, and took herself off to her mother’s place immediately.
The younger two have been fine, especially the one who is already a bit rainbow.
What I told them all is: this isn’t a secret any more. I didn’t want to pull them into the closet with me, but instead to open the door a lot wider. What that means (for me) is no more hiding. While I’m not going to wave Vivienne in people’s faces, nor am I going to be hiding away and hoping I don’t meet anyone who might recognise me.
Aftermath
I’m still processing all this. My daughter’s reaction hit me especially hard. Instead of feeling relief, or satisfaction, or triumph, I felt deflated and disheartened for a couple of weeks. It made me wonder whether I had done the right thing at all: did I push it too hard? Should I have waited longer?
I’m gradually feeling slightly better, and early indications are that she is coming around a bit more. But I still feel it’s too soon to be celebrating.
The person who has made all this possible has been my amazing partner, Missy, who has unfailingly supported me, gently coaxed me away from my tendency to catastrophise everything, and used wisdom and gentleness to help me reframe my feelings more positively. I still wonder how I’ve ended up being so fortunate.
Out, and Proud?
The word Pride is often used by rainbow people. We have Pride parades in many cities every year. They have gone from being protest marches against oppression to being (in the main) colourful parades suitable for the whole family, which is a wonderful thing. The struggle isn’t over, of course, and in some countries things seem to be actually going backwards.
But the notion of Pride is a powerful one. It’s retaliation against the sense of shame and exclusion that many of us have felt. (I know that what I’ve experienced is a drop in the bucket compared to what others have experienced!). The concept of Pride is for rainbow people to be able to say: here I am; I am a worthy person; and I am proud of who I am.
As of today, I’m not feeling proud of myself--yet. Perhaps this moment will come. And, as one person after another learns about Vivienne and responds with warmth and acceptance and curiosity, rather than revulsion or scorn, my self-image is gradually changing. And my wardrobe is improving and my makeup is looking better and I’m feeling more comfortable and natural when I go out. The overall trend is upward.
When I started talking to my trans friends and acquaintances and Facebook groups about coming out, several of them clearly saw it in very different terms from me. They saw it as a thing to celebrate. Have a party, they said (a gender-reveal party!). Make it a special day! Enjoy it!
This had never once occurred to me. Until recently, coming out has been something I dreaded, and was not looking forward to it at all. (Missy spoke of “ripping the plaster off”). Having a party to celebrate? It’s definitely something I’m thinking about, and it might make a turning point.
So what is the future going to look like? That light in the distance is beginning to look a whole lot closer. And the face that I'm going to show to the world is going to look like this one a whole lot more often.
Posted by Vivienne at 20:11

Email ThisBlogThis!Share to TwitterShare to FacebookShare to Pinterest
Labels: coming out, identity, Vivienne