A decade ago, living in Scotland, I was flicking through the channels late one night on the TV. I stumbled across a sit-com about the owner of a tanning boutique in Glasgow. There was something about the lead actress I couldn't put my finger on at first. I watched the rest of the show, desperate to catch the credits. And there it was. The lead actress was a man, Simon Carlyle, and the show was called Terri McIntyre, Classy Bitch. Simon not only played the lead, the eponymous Terri, but created and co-wrote the show with Gregor Sharp. 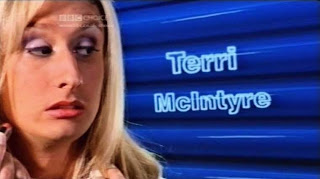 Naturally I was hooked on the show from then on. And to be honest, I watched it because I am a crossdresser. But the show was brilliant: funny and clever and subtly observed, but tempered with enough vulgarity to appeal to the schoolboy in me who loves that. I also enjoyed the Scottish quirkiness of the humour.

What strikes me about Terri McIntyre, Classy Bitch, is that it's common for comedy actors to crossdress as part of the joke, to add a dash of absurdity to the comedy. Typically there is a hint of acknowledgement, a wink to the audience that this is "supposed" to be funny. I am thinking of the characters in Little Britain, Mrs. Brown's Boys, Lily Savage and the Catherine Tate Show. On the other hand, this show seemed to make nothing of it at all: the character of Terri was not played for laughs as a man in drag, or as a grotesque parody like Mrs Brown or "rubbish transvestite Emily". Terri was sassy, outspoken, and attractive and believable as a woman.

This blog post isn't the first time I have mentioned the show; I mentioned it here. However, I decided to attempt to contact Simon Carlyle and see if he would answer some questions about the show. And he very kindly agreed. Here are the questions I put to him:

Can you tell us a bit about yourself? Are you a crossdresser?

I am not a cross dresser as such, but after the experience of doing the show I felt I'd discovered a side to myself and to life I had never imagined.

I began as a model in my teens and as I wasn't tall enough (or chiseled enough!) to be a proper male model, I figured I would pursue my figure skating as I'd been doing that competitively for years. However I was not sure I could see myself doing that for my whole life and so when I got offered a job as a tea boy on the Wheel of Fortune gameshow I took it.

I always knew I wanted to write, in hindsight. I'd been jotting down scenes on fag packets, etc., but I never thought it was a job or that I could do anything like that. So when my boss threatened to sack me for general laziness I confessed I was lost.  She then suggested I try to do characters and write them and she would send someone to film me at night in the office. I did, and out of that came Terri.


Lots of comedy writers cast themselves in the lead role of their productions. But most comedies featuring crossdressing are doing it for reasons of farce or burlesque. Terri McIntyre, on the other hand, is clearly meant to be a woman, but played by a man. This is a very unusual angle. What gave you the idea to cast yourself as Terri?
Terri felt so naturally an extension of myself that not to play her would be odd.
What aspects of yourself did you bring to the role? Where did the character of Terri come from? And was that your real hair?
She was part my mother, part my female friends, part some of my gay friends. It just seemed natural and novel. She came from a stereotype, to be honest. A Glasgow female stereotype of a low-end footballer's wife. I suppose we didn't calculate it in this way, but with hindsight this seems to make sense. We loved the idea of bold, brash stupidity coupled with a big heart and a big mouth. We wanted to celebrate feminine strength too, I remember. We liked the idea of a sexually proactive woman too.
It was a wig!!! A very very expensive one. So light to wear! My next female role (Yes, there is one in the pipeline) I will grow my own hair. I want to go even further in to bring a woman for the role.

Your next female role? Tell us more!

I can't at the moment-- I'm sorry!!
Did you come across any resistance to the idea? After all, Scotland isn't a place known for its acceptance of men dressed as women.


Resistance was muted but notable. Some people bought it; others who were slower on the uptake could not understand it. Straight males tended to be the most split but there were many in the BBC who supported the show and understood it. Scottish audiences were more receptive-- they loved her and didn't question gender, I found.

What was the most difficult part of acting in the role of Terri?

The most difficult part? The heat build up in the bra from the silicon breasts and finding stylish shoes in a 43/44.
Sorry, I can't resist. What was it like working with David Tennant?

David was great. Very, very professional. I moan a lot: he doesn't. He is a pal still.
What was the popular and critical response to the show? Why was it not renewed for a third season?
The show was popular but I think series one was funnier. Series two was too muted. I got offered the chance to do Thin Ice on BBC Two so I did that, and series three did not happen.
Who do you regard as your strongest influences as a comedy writer?

I think Woody Allen, Caroline Aherne,  Mel Brooks, Jennifer Saunders, Derren Litten and Joe Orton are among those whose work springs to mind.

What famous person would you most like to meet?

I would only like to meet one person, Liza Minnelli. Famous people don't interest me as such, but she does.

Why Liza Minnelli, if other celebs don't interest you?

God-- you know, I have no idea. I think it's because I got allowed to buy a VHS once when I was about 13, and it was of her singing with Sammy Davis, Jr. (my parents didn't allow me much and they watched everything that I bought so this was a rare treat). Shortly afterwards my friend bought me the album she did with the Pet Shop Boys and that was a prize posession too, so I think it is from that. She's pretty funny too I think-- her comic timing is good and underrated and I like that as much as the singing.
What place (if any) does Terri McIntyre have in your life now?
﻿

Terri still comes out to play once a year approximately, but she has faded in terms of the voice. I hear others now who are more part of the work I'm doing now. I do about once a year go out [as Terri] and go to a party or something as a treat for friends. If not at Hallowe'en it's usually around then or Christmas when everyone is in the party spirit. It's really just for laughs and to see how many admiring glances I can get from men (laughs).


When you say "she has faded in terms of the voice", are you referring to hearing Terri's voice inside you? Or did you mean something else by this?
I just mean yes, hearing it inside me-- as you move on and write different things then you have different characters whose voices are those that you play with and ad lib with, in the house, etc. Terri is not so much there now-- she was in my twenties.
Are there any plans to release the show on DVD? Apart from a few fragments on YouTube, where can the interested reader see it? And where can we see your other work?

All my work is on YouTube really. I've not reached the giddy heights of DVD release yet!!!

So, as someone who has successfully played the part of a sassy and foxy woman, in his own television show, Simon is counted among my crossdressing heroes. In addition, being paid to get made up, wear those nails, and those heels, and adopt that character, makes me more than a little envious.

I want to pick up on Simon's comment: Terri felt so naturally an extension of myself that not to play her would be odd. On the one hand, Simon's performance is an act: a deliberate facade. On the other hand, by his own admission, some (many?) aspects of Terri came from within him. And indeed, when one watches Terri in action, it's clear that the wiggles, the sneers, the pouts look very convincing. Put plainly, Simon does it so well that it's clear that he has a lot of Terri inside.

I've touched before on this theme. When I am dressed, I carry myself differently, I hold my body differently, and my gestures and expressions are different. How much of that is just mimicry (a conscious effort to behave in a feminine way)? And how much of it is innate (the way I would like to behave all the time)? The answer is not clear to me. I seem to remember learning very early (and very hard)  that there were certain gestures and behaviours which boys "don't" do. But if that hadn't happened; if I were somehow raised to adulthood apart from anyone to copy my behaviour from, what would it look like? Would it look masculine? Would it look feminine? Would it be a bit of both? Or would it be so removed from normal human behaviour that it wouldn't be possible to identify it as one or the other (which would suggest that all our gender-specific behaviours are learned)?

My thanks to Simon for answering my questions and providing the images that illustrate this post. I can't wait to hear about his next project, and you can be sure I will let you know about it the minute I hear anything!

If you want to watch Terri McIntyre, you can start here on YouTube.