Perhaps just a quickie for this one.

One of my favourite radio programmes is More or Less, a mathematics and statistics programme produced by the BBC. I heartily recommend the podcast, which I adore. A shout out to regular presenter Tim Harford, who is brilliant, funny, quirky and fascinating. Another shout out to series producer and frequent guest presenter Ruth Alexander, who has one of the most beautiful voices ever to tickle my eardrums. 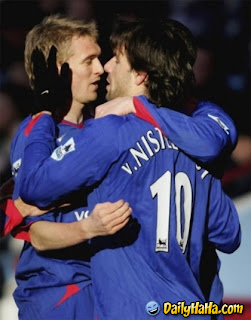 The program styles itself as a guide to the numbers "in the news and in life", and is very, very good at sniffing out numerically dubious reports in the news, claims by politicians, and interesting angles on problems, such as the Tuesday Boy problem, or the wonderful question (answered definitively): if you stacked a 4x4 Lego brick on another one, then added another, and another, how tall would the stack become before the bottom brick is crushed by the weight of the stack on top? (*)

So one of the questions they tackled was this: how many gay professional football players are there? (Of course, you know I mean soccer when I say football). How many can you think of? Not many, I'll bet. The most recent openly gay professional footballer in Britain was Justin Fashanu, and that was 20 years ago. Wikipedia devotes a whole article to the question. Football statistician Bill Edgar, of The Times did some analysis.

First, Edgar made the assumption that the rate of homosexuality among professional footballers was the same as in the general male population. He found varying estimates of the prevalence of homosexuality, so chose the lowest reasonable estimate he could find: 1.5% (see my discussion here), which is still a bit higher than the 1% figure which I suggest.

Looking specifically at Premier League football players, there have been 3,200 of them in the last 20 years. The statistical chance of none of those men being gay is 1 in 1 thousand million million million; 1 in 10 to the power of 23. 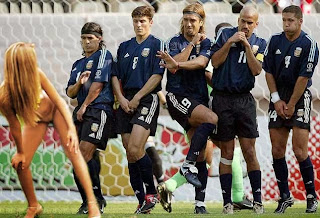 Okay, so numbers this large make my head hurt. What does that mean? More or Less says it means that if the whole Earth's surface were covered in white drawing pins touching edge to edge. and just one of them were red, the chance of you picking the red one, at random, is 200 times higher than the chance of there not being a gay footballer somewhere in the Premier League over the last 20 years.

So, mathematically speaking, we can say it is exceptionally unlikely that there hasn't been a gay footballer in the Premier League. We cannot, of course, say how many there have been; we cannot know if the prevalence of homosexuality in Premier League footballers is the same as in the general male population.

It may mean, of course, that gay men are excluded, either overtly or covertly, from the Premier League. It may mean that gay men can become professional footballers, but remain in the closet for fear of hostility from fans, managers, clubs, or media. And Justin Fashanu's career definitely suffered after he came out.

What it shows to me is that acceptance of homosexuality is not as far forward as we all like to think it is. This is bad news for any group seeking integration and equality with what we like to call the "general population".

Top NZ rugby player Ryan Sanders has come out and admitted he is gay, after his professional playing career was over. In the interview in the NZ Herald, Sanders admits to having feigned relationships with women to conceal his homosexuality. The elite rugby players here are the national team, the All Blacks, and Sanders believes at least one of them is gay (and he may be including past members). Statistically speaking, he is almost certainly correct. According to this article, there were 1109 men in 2011 who had played for the All Blacks. That's not far off the figure (3200) used to calculate the British odds, as above.

This article also drew my attention to Thomas Hitzlsperger, a German by birth who played in the English Premier Division. Hitzlsperger came out as gay only a couple of weeks ago, after officially retiring from football in September 2013. According to Wikipedia, Hitzlsperger had a long-term girlfriend, Inga, from whom he split in 2007, just before they married.

What these men have in common is (seemingly) concealing their homosexuality during their careers, only coming out after they have retired. Each has concealed his homosexuality by dating women. Whoever the gay footballers are, they are still keeping it quiet while they are in the public eye. I feel certain that Hitzlsperger is not the only gay Premier Division footballer. Where are the others?

Well, it's like buses. You wait for ages, and then three come along at once.

The England Women's Soccer team captain, Casey Stoney, has just come out and revealed she is gay in the last couple of weeks.

Meanwhile, across the pond, NFL player Michael Sam has announced he is gay. Almost predictably, anti-gay campaigners protested openly in public (methinks they doth protest too much?), attempting to picket a ceremony at which he was to be honoured. But their protest was drowned, heroically, by 500 students who formed a human wall between Sam and the small group of vocal protesters. This is an extraordinary gesture, and you can read the full story here.

And it has just been announced that NBA player Jason Collins has been given a contract with the Brooklyn Nets. Collins announced he was gay last year-- but found himself without a team. Admittedly, his contract is only for 10 days, but it's a start.

Collins, Stoney and Sam are still within their playing careers; in fact, in the ascendency. Does this mean that a floodgate of gay sports people is about to open?

I am indebted to Rachel for drawing my attention to Casey Stoney. Please feel free to tell me about any other gay sports people you may hear about.

I have just become aware of the National Gay and Lesbian Sports Hall of Fame, which was established in 2013. It's inaugural list of inductees is very sparse, and includes at least one dead person as well as several organisations (rather than individuals). And, of course, it's limited to the US, though it is (apparently) open to trans people. Nonetheless, it's a step forwards.

I didn't think I would be able to do this, but finally, I can introduce a transgender international soccer player. Jaiyah Saeluah plays for American Samoa, officially one of the weakest international football teams in the world.

Saeluah is a fa'afafine, one of a culturally-accepted third sex which exists in the Pacific Islands. In simple terms, fa'afafine are usually boys raised as girls. I have blogged about them twice already, here and here. She is also one of her team's star players. She is fully accepted by her team mates, and her manager, although she is known as "Johnny" when out on the pitch, and she was rejected from the college soccer team when she went to study in Hawaii.

Admittedly, as a player for one of the most inconspicuous teams in the world, it's unlikely that Saeluah will make much of a dent in the status quo. But nonetheless, hers is a triumphant story. They've even made it into a movie, which I can't wait to see.

With thanks to Peter, I can direct you to a Guardian interview with her here.
Posted by Vivienne at 22:28