I have realised as I have written this post that most of it comes from Perry himself (or his interview subjects). In a way, that's OK. I think Perry has tremendously powerful points to make, and really this post is about teasing them out a little and exploring them a bit more closely.

Perry: So what is it about being a man today that makes some men so desperate to be women? All men live in a fantasy world, to a greater or lesser extent. It's just that some fantasies are seen as suitably masculine while others are unacceptably feminine. As well as being a transvestite, I'm also a biker. The two things seem to me to have more in common than you might think. I think the two things have in common a sort of adrenaline addiction, really. There's also an element of display as well. I mean, looking at biker leathers, they're quite theatrical.

Biker: I knew exactly what bike I wanted. I knew what colour I wanted the bike. And I guess for sheer vanity I knew I also wanted my helmet and outfit to match. Yeah, maybe it's the whole costume thing, isn't it? You're a bit freer. You've been set loose by the costume that you're wearing, and you're able to be something a bit different. Maybe. (laughs).

Perry: Whatever they say, all men dress to get particular kinds of attention. It's not unique to transvestites. It's just that the acceptable range you can display as a man is quite narrow. Talking to these guys, there's a lot of parallels between transvestism and being a biker. It's just that, instead of putting on a skin of femininity, they are putting on a kind of carapace of masculinity. But it's still for show, I think. It's still about showing the world a role. This time though, it's all man.

In the documentary, Perry rides a normal bike on the track. But I should have known better! Perry has had a very special motorbike commissioned for himself. There is an excellent and articulate discussion of the bike here, at The Vintagent website. Paul d'Orleans, the author of the website, writes:


Vintagent: With a matched riding suit of bright yellow boots, an outrageous lavender Peter-Pan-collar jumpsuit, and spring-green helmet, Perry's riding ensemble creates a motorcycling image which borrows nothing from anyone or anything...there's simply nobody else on the road with the cojones to wear THAT outfit while riding THAT bike. While custom shops, tattoo parlors, and clothing outlets are busy selling 'individuality', Perry has taken a brave and lonely path, to BE an individual.

I couldn't put it better myself. But back to men and frocks. I love Perry's turn of phrase: "carapace of masculinity" is a very powerful expression. I can't help thinking of people like Jan Hamilton, who tried to crush her femininity by becoming uber-masculine, a special forces soldier. It didn't work; or to be more correct it worked for a while but made her profoundly unhappy. Hamilton is, however, an extreme case. I wonder how many genuinely sensitive men hide their feelings behind badges of masculinity (bikes, trucks, guns, tattoos, football) because they feel they cannot do otherwise?


Perry: I think it's quite hard for men today, because there's an increasingly narrow bandwidth of behaviours which are seen as exclusively masculine. As women have quite rightly encroached on what used to be seen as male territory, all that's left is the negative things. There's less scope for a sensitive man to feel at home. What kind of men do we actually want boys to become?

To find out Perry visits an inner-city school, where he holds a conversation with a group of teenaged boys, who express, in a forthright and surprisingly articulate manner, their views of masculinity as it is today. But then he comes onto this topic, which is very close to my heart.


Perry: Feelings aren't intrinsically male or female. But you wouldn't know that from the imagery we see around us. It is this apartheid of the emotions that transvestites are rebelling against. But it's a rebellion that's open to everyone. I have always wondered whether I could experience some of the things I get from being a tranny without crossing the gender divide. 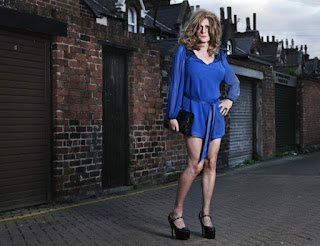 (There he is again with the turn of phrase: "apartheid of the emotions"). I too have often wondered the same. For the record, wearing a kilt does nothing in this regard. It just doesn't even feel like a skirt. And it's interesting how Perry associates crossdressing with its emotional content and the role of gender. Another strong theme of this blog is that I pursue crossdressing partly to escape from the masculine expectations placed upon me, in part because of the dearth of emotional expression open to men.

Perry visits a tailor in Savile Row to have a suit made, and remarks "It was lovely, but it wasn't quite doing it for me". He then goes on to explore the role of the "effortless gentleman", a man of impeccable good taste and good manners, and laments that much of this has been lost.


Perry: I think we threw out the baby with the bathwater, because there were some lovely things about those men. There's a kind of straight man that I call an "exquisite", although I fear they are a dying breed. They are dandyish men with a love of dressing up and an old-fashioned confidence in gentlemanly virtues. Deep down, heterosexual dandies strike me as transvestites' closest bedfellows.

Perry: When you were drawn to being a dandy, do you think that you were moving away from certain aspects of masculinity?
Nick Foulkes (dandy): Conventional masculinity, at the time, yes.
Perry: And what was it that you wanted to get away from?
Foulkes: The coarseness. I want life to be as Cashmere soft and as velvety smooth as I can.
Perry: You're not split?
Foulkes: No. I thought there was enough there in men's clothes to actually be getting along with. It never really occurred to me to dress up in women's clothes.

I somewhat agree with Perry about dandies, although, to the best of my knowledge, I have never met one. I have possibly met several men who might be considered an "exquisite", the kind of man who unfailingly makes me mind my manners and watch my language, and makes me feel uncomfortably inferior despite my unshakeable self-confidence and reasonable socioeconomic status. I do not aspire to being one myself!

Finally, I think dandies are indeed a dying breed. But what isn't a dying breed, and in fact is extremely popular and fast-growing, is the phenomenon of Steampunk, and here dandies and trannies find a warm welcome. But that will need to wait for the next instalment.
Posted by Vivienne at 17:58