In the final part of this series of blog posts, I finish off discussing Grayson Perry's thought-provoking documentary, Why Men Wear Frocks.

I was wondering when he was going to start talking about bridal dresses, and here he goes. The segment is short, but the insights are quite profound:


Perry: The wedding dress is the last bastion in our society of the fantasy, frilly, feminine, properly symbolic frock. But I had a feeling it was dying out even here. For entirely understandable reasons, many women don't really believe in it any more. What strikes me is that, it's almost like this idea of the feminine, the princess, the bride, is so foreign to the woman's normal every day experience, that it's become theatricalised. For me, for a tranny, dresses are symbols of vulnerability and innocence and submissiveness and things that men don't have access to. There's something about putting on a dress that instantly gives me permission to act out those feelings.

There is a transvestite obsession with bridal dresses. In fact, there are whole social events devoted to crossdressers and the trappings of weddings, such as this one in the UK. Sites like YouTube and Flickr are absolutely stuffed with images of them. My own view is that some transvestites seek out archetypes of femininity (the schoolgirl, the maid, the bride) and attempt to pursue that. If a woman can be pampered and beautified from top to toe on her wedding day, and wear the most expensive dress of her life, to look the most beautiful that she can be, I can understand why a transvestite would want the same. From what I see on the Web, some of them spend a lot of time and money to get the right look, and some of them, it has to be said, look amazing (such as Cecilia Sand here).

On the other hand, I feel vaguely uncomfortable about it all. Though I understand the desire to wear a bridal dress, I just can't help thinking it's a bit too strange for me. And it's interesting to hear Perry talk about his idea that even among women, the idea of the wedding dress is dying out.

For the next part of his documentary, Grayson seeks to explore the idea of crossdressing among the young. I have to say, I tend to associate crossdressing with older men (What is my definition of older? Older than me!) and this fits with the autogynephilia model quite well. What also fits is the idea that autogynephilia is universal; in other words, young men have it too. My niggling suspicion is that they might just get on and do it, but call it something else, in order to spare themselves the discomfort of associating with the established crossdressing scene.


Perry: It's not just traditional femininity that's in decline. I wondered how much the rigid gender distinctions, which transvestites are responding to, really meant to young people today. I spent a night out on the goth scene.

Perry: What do you think about the kind of boys who would wear makeup?
Goth girl 1: We love them very much.
Goth girl 2: We like the boys who wear makeup.
Perry: What do you like about them?
Goth girl 3: They look very pretty.
Goth girl 1: They are pushing boundaries, plus they are much more attractive.
Perry: What I'm interested in, is: are trannies dissolving into youth culture? I mean, would you call yourself a tranny?
Goth boy: I don't think so, no. I'm just a pretty boy.

In this segment, Perry (himself bedecked in ribbons and bows) is talking to a group of young people, more or less identically kitted out in long hair and heavy makeup. And there they are: young men wearing lipstick and eyeshadow and nail varnish, with plucked eyebrows and long hair and ribbons. I am certain they would be horrified to be called transvestites, but from a certain perspective, that's exactly what they are. I think cosplay is another means by which adolescent boys can simultaneously dress up as girls and pretend they are not transvestites.

In my email correspondence, I have touched on the topic of whether crossdressing is gradually becoming acceptable, even cool, among young people. I think a reasonable summary of the consensus is that crossdressing is now cool, as long as it's not my dad who's doing it. I think it's easy to talk about "young people" as if they are a homogeneous group; but of course, they are as widely different in their views as everybody else! Still, it seems clear that people like Gregory Gorgeous are raising both the profile and the acceptability of crossdressing for young men.


Perry: It would be great if everyone could act as masculine or as feminine as they felt like, without worrying about the gender divide. And if that ever happened, then perhaps there wouldn't be much point in being a transvestite. In the meantime, there are some lessons I've learned from being a tranny. You don't have to bind to the rigid distinctions between maleness and femaleness we've inherited from the Victorians to see that we could all benefit from sampling a bit more of the whole emotional range.

Perry: I think what I've learned from being a transvestite, over the years, is that it is all about finding myself as a man. It's like there's a part of me, my original male self, that was uncomfortable, so it kind of jumped ship somehow. The way that it manifested was transvestism, a kind of package of feelings and behaviours that had been somehow banished from my kingdom of masculinity, and so they lived in this island off the coast, if you like, called transvestism.

Perry talks of himself here (and throughout the documentary) as being a man, albeit one who (like me) lacks an outlet for his feminine feelings. This ties up quite neatly with similar ideas I've brought up elsewhere on this blog, that crossdressing is driven by masculinity, not femininity.


Perry: I think I've had a fair experience of what is on offer to the transvestite, and it's always kind of like: am I emotionally satisfied with the experience? And I always think it's a crude way of dealing with something that I think could be dealt with more graciously or almost gracefully in my everyday life, and so when I'm out dressed, it's good enough, but often I come home thinking... (pauses) at my core level I'm a little bit unsatisfied with the experience.

This is another point I wanted to bring out. I like to think of myself as a wholly rational being, whilst also being fully aware that I am not one; indeed probably nobody is. The rational part of my brain asks me, as I am dressing: what possible benefit from this activity could there be? It doesn't solve any problems. It doesn't change anything. Meanwhile the emotional part of my brain says: because it feels absolutely wonderful, it relaxes me, it alleviates my stresses. And afterwards, instead of just looking back and enjoying it, I usually feel a little bit guilty. Couldn't that time have been better spent somehow? I am forced to agree with Perry that, deep down, crossdressing is a slightly unsatisfying activity. What a powerful insight.


Perry: I think what transvestites are trying to do, sometimes in a clumsy, slightly humorous way, and sometimes not with the greatest self-awareness, but often very elegantly and interestingly, are trying to be whole people that show their whole selves. And I think that's a great thing, I think that's an aim for all of us. Maybe transvestites are the most graphic example of the pressures that men are under, and the role that men are expected to fulfil. I think they are showing us something of what men could be. I'm not saying that men should wear dresses, it's just that symbolically they are saying: there's something up with being a man.

Throughout this documentary, Perry has shown great sympathy and tolerance for all the people he has met (with the possible exception of Charlotte). In turn, he has been treated with respect; for example by Dr Oriole Cullen, herself a very beautiful woman. People don't seem to notice that Perry is interviewing them in a dress (in the case of Cullen, a very lavish and elaborate one). 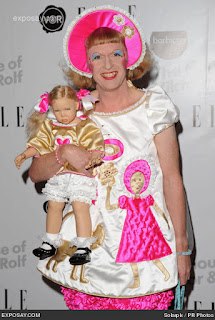 In my very first post about him, I quoted Perry as saying: "Other transvestites think I'm the wrong sort of weirdo because they don't like my dresses". I just wanted to explore that a little more. In this documentary, he has seemingly liked, and been liked by, everyone. Nobody seems to have been bothered by his dresses at any point. In fact, since it was screened he has become even more popular and widely-known.

The themes of this documentary ring out: crossdressing can be sexy; it's a compulsion; it's a symbolic act, it's about escaping the expectations of masculinity, and it's all about the emotion. I absolutely agree with all of that. In this documentary Perry comes across as tolerant, compassionate, sensitive and deeply insightful.

I still struggle with his little girl image, though. If you Google Perry, you can see pictures of him in every situation, but the commonest types of pictures seem to be him dressed like a little girl (even when he met the Queen). If we accept the words of his own mouth; that for Perry, wearing this sort of attire is symbolic, and about emotion, then one can see that he is doing it to express those things to be found in little girls: purity, innocence, cuteness, vulnerability; perhaps even playfulness or mischief. On the other hand, I feel very strongly that those things belong to little girls; they don't belong to grown men. And I guess that grown men need to accept there are some things they just can't have.

I draw a parallel here with Michael Jackson. I accept that, because of his painful upbringing, Jackson spent much of his adult life trying to recapture his lost childhood, partly by reliving it vicariously through small children. Even so, him spending the night with children is not OK, whichever way you cut it. Likewise, I understand Perry's wishes to escape the confines of traditional masculinity (in this, I am right with him!) but to dress up as a little girl is, for me, the wrong way to go about it.

At some point, I will get round to reading Perry's autobiography, and then perhaps I will understand him a little better, and will be able to talk about him a little more. For now, however, I have tried your patience long enough, and I promise to write about something different next time!
Posted by Vivienne at 16:09