Time to write another blog post about one of my crossdressing heroes, Emma Ballantyne.

I first came across Emma several years ago on YouTube ("in the starry nowhere"), where she was posting short films which she had made of herself crossdressing in public places. Her technique for filming herself is simple but effective. She has a video camera inside what I assume is a bag or other innocuous item. She leaves it running on a flat surface, then (presumably) walks away from the camera, remains in shot for a couple of minutes, then returns to the camera. By skilful editing, she creates films which appear to consist of documentary shots of her walking through a park, or a town, or a country estate.

Take a look at one of her earlier efforts, and you will see what I mean. It's very effective.

This film, one of her first, shows several Emma trademarks. The style of filming is as mentioned above, with a pleasant musical soundtrack added, and a knowing smile at the camera when no-one is looking. That shares just a little delight with the viewer and is highly endearing.

It's worth commenting on this video in a detached way. First, the film-making style is highly sophisticated, for what is in effect a single person, filming themselves with a single camera. It's (IMHO) much more effective than what we also see a lot of on YouTube: first-person camera footage of crossdressers taking pictures of themselves in mirrors and whatnot. Such images tend to be fuzzy and swing wildly around, making the viewer dizzy.

Second, Emma's look is pretty natural and understated. Emma is very fortunate to have a slim figure which doesn't look out of place. She dresses appropriately: no ridiculously short skirt or blond wig or scarlet nails two inches long. She wears clothes which are what women would actually wear.

She doesn't draw attention to herself, but instead attempts to blend in. In fact, in her early videos she avoids direct personal contact. I am pretty certain that she doesn't draw a second glance from passersby, most of the time.

As time went on, the YouTube hits began to pour in, and Emma began to become a little bolder. Here she is buying a pair of shoes in a shop.


This is a quantum leap forward. Until now Emma's videos featured her dressing in basically deserted places (technically "public" but with very little chance of being seen by anyone!). But here she is, not only buying shoes, but seemingly having a pleasant conversation with the assistant, who may be a Hobbit, or it may just be the perspective. Once again, though, the outfit is understated and reasonable.

Emma's videos have become extraordinarily popular. Her YouTube channel has (as of today) uploaded 55 videos, and received almost 4.8 million hits. She has over 6,000 subscribers. One can clearly see her confidence (and enjoyment) improve as time goes by. Here she is in Venice, with Luisa. Did you say Venice? Yep. Take a look.

For some reason, Emma's video won't embed here, but you can see the full version on YouTube. This video presses my Envy button. This isn't quietly blending into the background in some deserted corner of a cloudy Scottish town. This is out and about, in Venice, with Luisa (another very successful and passable crossdresser), in full public view, mingling with crowds and seeing the sights. Emma has also posted several other videos of enjoying the nightlife in Manchester and other towns, while dressed. 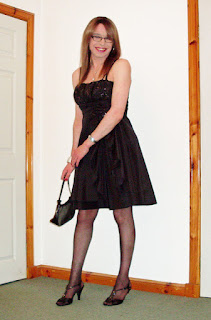 I've said elsewhere in this blog that my personal crossdressing pinnacle would be pretty close to something like this: going dressed to the theatre, or a museum, or an art gallery (though a nice candlelit dinner with a lovely bottle of wine wouldn't be out of the question!). And Venice is basically all of those things (theatre, art gallery, museum) all rolled into one. Venice is one of the most beautiful and extraordinary places I've ever been, and the thought of just strolling round it, all dressed up? Excuse me, while I go and lie down with an ice pack on my brow.

In addition to her very successful videos, Emma has (naturally) posted a simply vast number of photos of herself on Flickr. I recommend Emma's 48 "personal favourites" as a reasonable tour through her hundreds of sessions and pictures. I can see Emma's style evolving and her look becoming more sophisticated and convincing as time passes. Compare this glamorous, attractive look with the hesistant look of the girl smoking on the wall in the first video.

So what do I think of Emma?

First, I admire and envy her. She and I are about the same age, and we both come from Scotland, so we already have a lot in common. Secondly, she seems to just take pleasure in the act of dressing as a woman and going out, and she has done so with what seems like considerable success, and considerable enjoyment. She has experimented with a few lingerie shots, but apart from that, seems content to stay away from overtly sexual images. No maid, no bride, no tart. That raises her in my estimation. It must be said, she draws some extremely explicit flirtatious comments on some of her photos, though she never seems to respond to them. 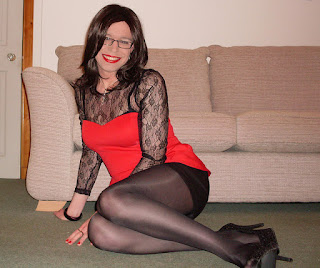 Second, she is fortunate enough to have a really nice figure, and makes the most of it with a good sense of what works in terms of clothes and appearance. In other words, she dresses like a woman, not like a tranny. The technical stuff; the postures, the gait, the gestures, all seem to work well. Yet she is not so beautiful that I feel that I could never possibly achieve a look as good as that. She represents an ideal to which I could reasonably aspire. I could be a contender! If I looked as good as that, would I do what she does? Hell, yeah!

Is there anything which I don't like about Emma? Well, truthfully not all of her outfits and images work equally well (IMHO). But that's what experimentation is all about. I have to say, she gets it right much more often than I do, and much more often than not. Lacking an adolescence trying out every different look, we crossdressers do need to experiment a bit, and I know I also do. Emma is also a smoker, and smokes a lot in her videos. Smoking, I can't help noting, is a real turnoff for me.

But what does Emma think of herself? It's quite hard to know. Although she posts images by the cartload, she doesn't seem to post text, and has no blog that I have been able to find. If you know of one, do please let me know and I will take a look (and link to it from here). And in addition, in all her videos, we never hear her voice!

She has, however, been nominated as a Covergirl on Rachel's Place, and you can read her statement here. This is a slightly edited version.


My name is Emma Ballantyne, I am in my early 40s and I hail from Scotland. I guess have always known I am transgendered since I can recall having the urge to wear girl's clothes from around the age of five.

Despite these feelings, I felt consumed by guilt and constantly fought the urge to dress. There was no internet back then of course, and very little literature available on TG subjects. The media and entertainment industries portrayed crossdressing as a habit of psychopaths, deviants and the subject of ridicule. The few girlfriends I shared my secret with tended not to be able to cope with this side of me, and I just felt like I didn't fit in. (I still don't, if I'm honest).

When I am outside as Emma I like to go unnoticed but still want to be seen, if that makes sense. But for some reason, and I still to this day don't know why, I decided to upload a short video clip I filmed of myself at an ATM onto YouTube. The feedback and positive comments I received amazed me. As a result I grew in confidence and would go out more regularly and interact with people, and I can honestly say that uploading that video completely changed my life - for the better. I have now met wonderful friends who I can share a previously unspoken side of my life with and finally feel happy to be the way I am.

Having said that, I only present myself as a girl maybe 5 or 10% of the time. As a male I have little pride in my appearance but when I transform myself into Emma I pay attention to even the smallest detail. Now I really do know why it takes genetic girls so long to get ready to go out!

And Emma once released a video onto YouTube of herself talking to the camera. She was wearing a lovely knitted top, and had a polished, interview-like delivery which worked well (even if the voice wasn't 100% convincing). This was the only time we ever heard Emma's voice. Unfortunately it's been removed from YouTube. Thankfully it survives on Rachel's place, and you can see it here in wmv format. Emma thanks her audience for their support and openly discusses crossdressing. Interestingly, she refers to herself as a transvestite in several of her video titles, and here in this one too. See my blog post about terminology.

Emma, I salute you. I admire what you do, and I congratulate you on your successes. I am more than a little envious. I wish you nothing but the best in your future endeavours, whatever they may be.

I have not only made contact with Emma, she agreed to be "interviewed" for this blog. Read her answers to my questions here.

Addendum: December 2020
The video I had previously linked to as the first Emma video has been removed. I have therefore substituted another, but there are plenty of similar ones to choose from.
Posted by Vivienne at 13:21