Faking It - Part One

One of my favourite podcasts is the one from Freakonomics Radio. Presented by Freakonomics co-author Stephen Dubner, and frequently featuring the other co-author Steve Levitt, it is a whimsical, funny and fascinating look at the "hidden side of everything". If you haven't read the book, or its sequel, you should stop reading this and go out and do so immediately. 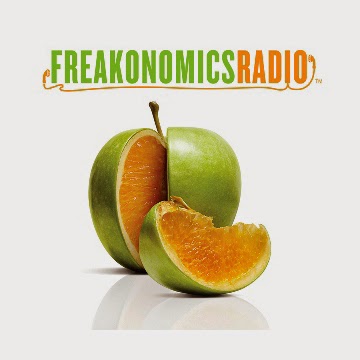 The fundamental premise of the books is that economics isn't just about money: it's about incentives of every kind. Any kind of gain or loss, any kind of reward or punishment. And that humans respond to incentives in predictable ways. The book provides many astonishing examples of statistical evidence of its claims, but the podcast builds on some of the details. Here is a partial transcript from the episode Faking It.


Dubner: You keep kosher. How kosher do you keep?
Kara: Extremely kosher. We allow no non-kosher foods into our kitchen, our refrigerator; we have three different sets of plates, plus another one for Passover—the whole nine yards.
Dubner: What’s your relationship with bacon?
Kara: (laughs) It’s secret and illicit–It was probably the first thing that I started cheating with.
Dubner: You cheat with bacon?
Kara: Again, not in my own kitchen, but I’ll go out and order bacon and pancakes. But at home it would be simply pancakes.
Dubner: Now, does you husband know about this?
Kara: He knows, he knows, he’s very forgiving.
Dubner: He knows because you tell him, or because you come home with the scent of your lover on your lips?
Kara: (laughs) A little of both, I have to admit.
Dubner: So you’re not really faking it with him, correct?
Kara: Correct, but we don’t tell my mother-in-law.

If you're thinking this post will be talking about how it feels to be a man who sometimes pretends to be a woman, then you will be disappointed. This post is about how my "ordinary" daily life involves faking it. This post touches on a previous post of mine which deals with privacy and secrecy, which was also inspired by a discussion on a podcast. Dubner really got me thinking.


Dubner: If the human psyche were a big map, nestled somewhere between the Sea of Cheating and the Valley of Lying, you’d come to the Kingdom of Faking It. I know what you’re thinking: No– I don’t fake it.

But actually I was thinking: yes, I do, every day. The examples which he provides are very similar, uncomfortably similar, to how I go about my life. In the example above, a Jewish woman admits to enjoying bacon, despite maintaining the façade of rigid observance of Jewish dietary laws. In another example in the podcast, a happily childless couple living in the Deep South pretend to attend church and pretend to be trying for a family because it is easier to get by in a society which expects those things. (They have gone so far as to choose a particular church which they pretend to attend, so that if the conversation gets a little more detailed, they are not immediately revealed).

Dubner even goes so far as to describe in detail Barack Obama's attempts to convince his voters that he is a regular churchgoer, and how he came a cropper when the preacher he claimed to admire turned out to have said some very questionable things.

I went to a private high school. My parents saved hard to get the money to send me there. I rubbed shoulders with kids who were from very wealthy families, and very quickly learned that my own modest background just didn't stand up. As a result, I started to pretend that I had travelled widely; that my father owned a luxury sports car; that we were wealthier than we really were. I hated myself for this pretence. I hated the fact that I had to be careful not to get caught out in a lie or a contradiction ("Wait a minute, I thought you said it was a green Aston Martin?"). I hated that it made me feel so inferior that I had to pretend to be something else, just to fit in.

Why doesn't Kara come clean? It seems to take a lot of effort to keep kosher as rigidly as she does, and yet she admits she breaks it with relish. Why not simply say: hey, I like bacon! Deal with it! Surely it's harder to maintain the pretence than just to abandon it? But I get it. By standing up, distancing herself from the observances of her community, Kara would be sending out a powerful message of dissonance with its core values. It is a lot easier to pretend, in front of people, and scoff her bacon quietly, behind the scenes. (There is a good chance her mother-in-law is doing the same!) And those societal forces extend right up as far as the President.

I am sure that most people who are doing this are not doing it for malicious reasons, but because the little white lies slightly oil the wheels of society. It's easier to fake it, to blend in. And to some extent, all of us, from the greatest to the least, is doing it too, to some extent.


Dubner: I’m a big fat faker, just like... Brian, the guy with a fake church, and Kara — that’s the woman who can’t tell her kosher-keeping family how much she loves bacon. Scientists have a framework for talking about this problem: signalling theory. It’s my way of telling the world that I’m a good friend; I’m not a sociopath; I’m a good candidate for that job you’re offering, or that last slot you have at an Ivy League school, or the sex you’re willing to have with someone. I’m faking it because I want you to like me, and I know I’m not worth liking (my italics).

I included this quote because it sums it up perfectly for me. It explains why, at school, I felt I had to concoct fake skiing holidays and fake sports cars, because I felt that my own personal qualities were insufficient.

And it also explains why, right now, I am faking it as an ordinary man with an ordinary life. I hide my crossdressing identity, even though that costs a lot of effort, because it's easier to just pretend it doesn't exist in public, then do it quietly, behind the scenes, where nobody can see. And, just as in high school, I hate the way that makes me feel. I am also fearful that if people find out, there will be unpleasant consequences. But I am also fed up; fed up of the effort it is costing me to make the pretence, and fed up of the sensation that people like the person they think I am rather than the person I actually am.

But lately, something has changed. I have come out to two of my friends. The first is a woman, whom I respect and admire greatly for her wisdom and compassion. She would also describe herself as a feminist, which gave me pause, and I sounded her out first by trying to engage her in conversation about the whole bathroom thing.

We were sitting in a café, and she knew I had something to tell her. I more or less blurted it out, and then started to talk about it very rapidly, but she silenced me by holding up her hand. "It's fine," she said. "It's cool". And there it was. I had more acceptance from her in the ten minutes of that conversation than in the ten previous years from my wife.

She asked a lot of searching and penetrating questions: had I considered hormones? Or surgery? I was disarmed by her directness. And all the way home, I was anxious: how would it affect our friendship? But there was also a great sense of relief, of being unburdened.

Then, a couple of weeks ago, I was talking to a male colleague. Again he is a man I admire, for his emotional awareness, his insightfulness, and his ability to relate to his masculinity without compromising any of these things. And again, I told him. He was visibly surprised, but has also been completely accepting. This second time around, it was easier to have the conversation. I wasn't sure I would get much sympathy from a man, but he tells me he completely understands it. Again he was curious, but about different things. Did I have a fem name? How did I choose it? Did I go out dressed to clubs to meet others?

I told both of my friends about this blog, and they have both visited. It seems not to have affected my working relationship with either of them, and they don't seem to have lost any of the respect for me which I think they both had to start with. Both of them, independently, have said they would like to meet Vivienne, and I will be sure to let you know if this happens.

Whether I tell anyone else, or whom I tell, I am still not sure. I already feel much better about myself. Both my friends have been able to see the positive side, the funny side of crossdressing, which are aspects of it which I haven't really been able to enjoy much. What I was looking for, most of all, and got from both of those wonderful people, was simple acceptance. Now I no longer feel like I am faking it, at least with those people, and I feel that the closet door has sprung open a little wider.

And to quote the punchline of a very old joke, it's better than bacon.

====
My thanks to Hannah for the lovely portrait of Vivienne. You can check out Hannah's blog here.

You can find the followup to this article here: Faking It- Part Two.
﻿