For those of you who don't live in Europe, the Eurovision Song Contest is an annual tournament of pop music which involves most European nations (and a few which are not, strictly speaking, in Europe, such as Israel). The rules are that each country submits a brand new song by a chosen artist (often a newcomer act), which must be performed live on the night of the contest.
﻿
The contest has given rise, over the years since 1956, to some very famous acts, such as ABBA, and even Celine Dion, singing for Switzerland in 1988. However, the tendency of some acts to compete in bizarre costume and with bizarre lyrics (who could forget the majestic poetry of Ding-a-Dong?), lends the entire contest an air of camp, verging at times on the farcical. It's screened live all over Europe, and it's a wonderful evening's entertainment, albeit pretty low-brow.

The other problem with the contest is the tendency of countries to vote for their political allies, regardless of the artistic merit of the songs. Each country, including the minnows like Malta, is allocated an equal weight of voting in the contest. This tends to make for some tension, as occasionally obviously good songs get gradually nudged downward in the rankings by political voting.

This year, of course, the winner was Austria, whose artist, Conchita Wurst, won by a comfortable margin. So far, so normal. What is different about this contest (and the reason I am writing about it) is that Conchita Wurst is a drag queen, with a beard. (I love that in German, wurst means sausage). Take a look:


Before Wurst even sang in the contest, she came under fire from Russia, Belarus and Armenia, who demanded she withdraw. Russian lawmaker Vitaly Milonov branded Eurovision a "hotbed of sodomy", while Armenian competitor Aram Mp3 described her as "not natural". Russia, in particular, has been institutionally homophobic for many years.

Though I haven't listened to all the songs for this year, I don't think this one, Rise Like a Phoenix, is all that brilliant. Even allowing for the handful of songs by fishwives in knitted shawls with accordions, which we are usually treated to in Eurovision, I can't believe this one, though it's all well and good, is actually the best in the competition. (The second-place song, Calm After the Storm by the Netherlands' Common Linnets, is, I think, a much better song).

And that leads me to believe that something else is responsible for Wurst winning the contest.

The most obvious thing which strikes one about Wurst is her appearance. Conchita Wurst is the drag persona of Tom Neuwirth. As a woman (i.e. without the beard), she would be absolutely dazzling; a knockout. On the other hand, the beard looks very odd indeed, very disturbing and out of place (while everything else, from the exquisitely curved eyelashes to the lip gloss, to the flowing gowns and fabulous shoes, screams "gorgeous woman!"). 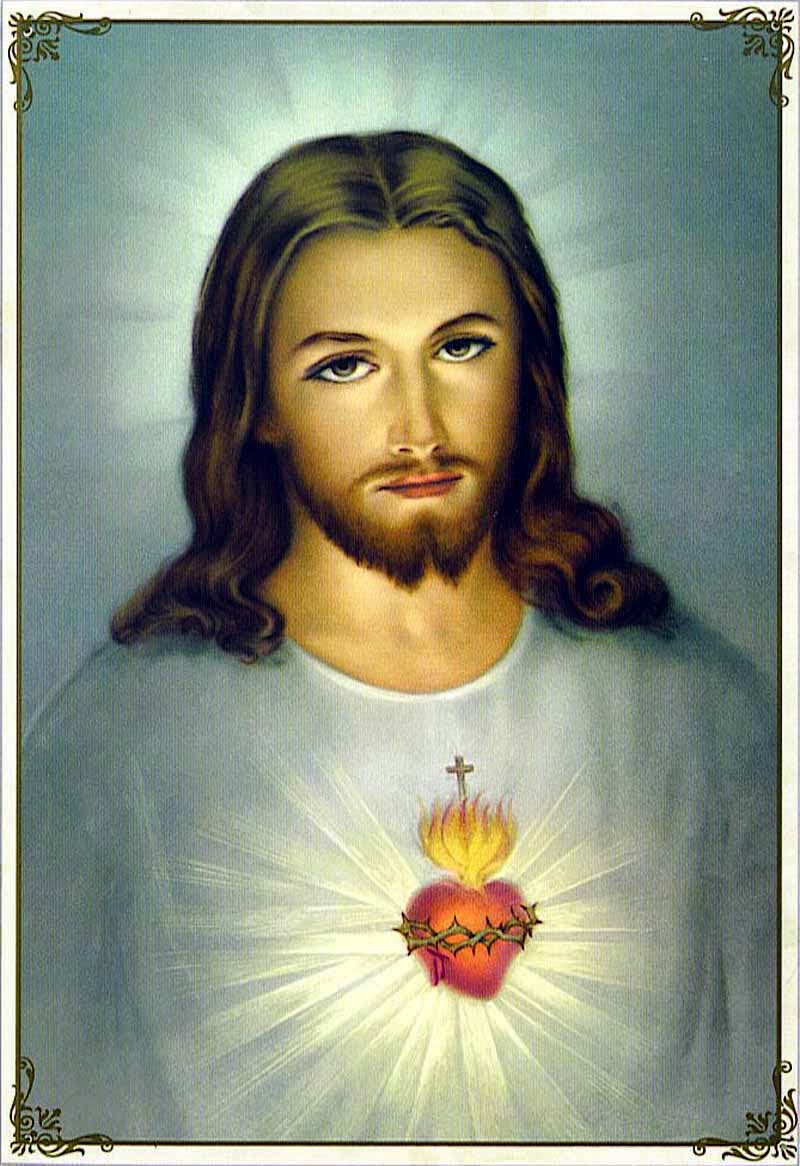 But perhaps gorgeous drag queens are too common; too mainstream? Perhaps an "ordinary" drag queen wouldn't have captured everyone's attention. The beard, without doubt, is the hook. The beard is also cosmetically enhanced; it looks just too perfect. And yet, Wurst is beautiful, in a strange and unusual way. Like chilli pepper on fruit salad, the whole package kinda works. I think it may be because she reminds me of another figure, with long flowing hair, a light beard, and deep, soulful eyes.

Wurst bears an unmistakeable resemblance to popular depictions of Jesus. There is no evidence that this is intentional, but it is (at least to my eyes) inescapable. Before you deluge me with hate mail, I intend to draw no further parallels between those two figures (and other commentators have noted a resemblance to a much more secular figure, Kim Kardashian).

Wurst hasn't been the first gender-blurring competitor in Eurovision. Israeli transsexual Dana International won the competition in 1998, with her song, Diva. Wurst isn't even the first bearded woman in the contest: France's 2008 entrant, Sebastian Tellier, had a backing group of five women with false beards (to match his natural one), when he sang his song Divine.

When she won the competition, a delighted and emotional Wurst took the microphone:


Wurst: This night is dedicated to everyone who believes in a future of peace and freedom. You know who you are - we are unity and we are unstoppable.

I dream of a world where we don't have to talk about unnecessary things like sexuality, who you love. I felt like tonight Europe showed that we are a community of respect and tolerance.

Wurst's particular appearance is more in alignment with genderqueer than anything else I can think of. Nonetheless, from her personal website, it seems clear that tolerance is her most deliberate and explicit message. And for this, I think she deserves our congratulation and support. Though her motivations for wearing a frock may differ from my own, I think she is doing positive things to further acceptance of trans people in general.

And I think the reason that Wurst won Eurovision was the combination of those two things. First, that gimmick: an outrageous bearded drag queen, eye-catching and flamboyant, beautiful and proud. This might not have been enough to do it, but set against the background of Russian homophobia, it gave the more progressive Western nations the opportunity to poke one in the eye of those stuffy old Russkies; a chance which they couldn't pass up.

By competition rules, Austria will host the contest next year. At least one commentator is predicting a lot of false beards among the audience!

No sausages were harmed in the writing of this blog post, though some had the Wurst night of their lives. No more puns on the name: I promise!

Some of my commentators, including Janice, below, have pointed out that Conchita Wurst's name, although it translates as sausage, was chosen because of the German phrase es ist mir Wurst, meaning it's all the same to me. Whilst I accept this argument, I can't help thinking that sausage is also an excellent drag queen name, because of it's suggestive nature. Mind you, in the context of drag queens, it's hard to find the name of any fruit, vegetable or foodstuff which is free of suggestive connotation! 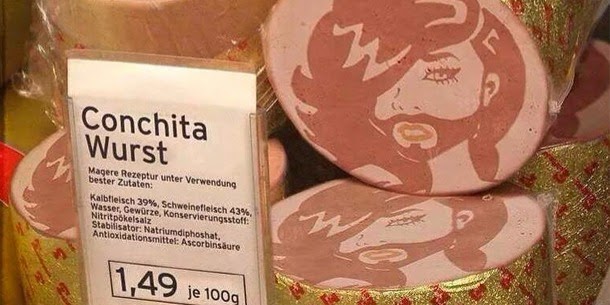 But taking the name literally, one Austrian butcher has produced an actual Conchita Wurst, a sausage with her face on every slice. How wonderful is that?

Meanwhile, the trans blogosphere has been convulsed with debate about the exact place (if any) that Conchita Wurst occupies, and whether she is doing us good, or harm, by her antics.

One viewpoint seems to be that Conchita Wurst is the female drag persona of a male entertainer, and that therefore Wurst isn't trans at all. A second viewpoint seems to be that, as a man in a dress, Wurst is perceived as being trans by the general public, whoever they might be, and is (whether we like it or not) going to get lumped in alongside the rest of us crossdressers, transsexuals, and so on. A third viewpoint, from the trans community (and expressed by Tasi in the comment to this article) is that, by deliberately mashing together a beard and a beautiful woman, Wurst is doing harm to the trans community by furthering a popular perception that we are all a bunch of weirdos.

I have been struggling with my own feelings about Wurst, but nobody has put it better than my correspondent Janice Lacey. With her agreement, and building on her comment below, I am quoting her here:


Janice: Firstly let me state that I wasn’t at all impressed with the bearded lady thing and deleted nearly all the posts on the social group I follow referencing it. I personally felt threatened by someone dressing as I like to, and also sporting facial hair. That being said, I eventually put aside my own fears of this subject and dived in with both feet.

As Conchita, Tom is allowed to wear a dress. The little boy that only wanted to wear a dress is now allowed to dress as he pleases. The beard, in my opinion, represents the male child. Tom is a performer and loves to sing, and as a drag performer is able to earn a living singing while wearing a dress.

Lastly let me summarize my thoughts: Tom Neuwirth and Conchita Wurst are a threat to me as a trans-gendered person. So much is being said about her being “Trans” that people are going to be looking at me and wondering if I am like her.

I AM MOST DEFINITELY NOT! I stand for something deeper, more significant, more important, and more meaningful!

Whoa there! What did I just say? My statement could also be made by my coworkers, my friends, my parents, my wife, or perhaps your parents, friends, co-workers and wife that can’t accept you as you are completely. How can I be who I am, as both Janice and James, and expect the general populace to accept me while I stand in as judge and jury against someone so totally different from myself? Tom/Conchita is unique, but not all that different from me really.

I vote to support his cause, for in doing so I am released from my own fears.

One of my correspondents wrote of Wurst: She makes us look ridiculous. She's neither man nor woman but a half-assed caricature of both. And while I can completely understand this viewpoint, from someone who wants to look as feminine as possible, I can't help thinking that, actually, that same comment could equally be applied to me, or other crossdressers.

Janice's comment has crystallised it for me. I cannot demand acceptance for myself as a crossdresser, and refuse that same acceptance to someone else who has a different way of presenting themselves.