You free your mind in your androgyny. -Garbage, Androgyny.

Androgyny seems to be everywhere these days. My hairdresser was talking about it only the other day. Admittedly, it's not new (look at David Bowie in the 1970's), but it seems to be becoming commoner and more popular.

Wikipedia says androgyny refers to the combination of masculine and feminine characteristics. Well, I think that's technically true, although perhaps the current interpretation of it is someplace in between male and female. One could technically approach androgyny from the male side (by making oneself more feminine) or the female side (by making oneself more masculine).

Nowhere is the current trend of androgyny more apparent than in the fashion world. BBC journalist Maya Sayer has been surveying the Spring 2014 collections of the fashion world and writes: Last week, as the Spring ’14 menswear shows kicked off in London, one trend sounded with all the subtlety of an air horn: androgyny is the new black.

She points out that several fashion houses are putting men wearing skirts, lace, halter tops, and other feminine clothing on their catwalks, "testing the boundaries" between men's and women's clothing.

I know that fashionistas have been talking about men wearing skirts as normal attire for decades, but it hasn't happened yet. I know that some cultures have skirt-like garments which men wear on a daily basis, but you and I know that isn't the same thing. I know there are some men in our culture who wear skirts regardless-- and good luck to them.

How can we mention the fashion world without discussing Andrej Pejic? As I have mentioned before, Pejic, a naturalised Australian citizen of Bosnian descent, is a man who is so beautiful that he is in demand to model both male and female clothing lines. He was voted the 98th Sexiest Woman in the World by FHM magazine in 2011, and was featured as a covergirl on Elle magazine. Wikipedia claims Elle is the world's best-selling fashion magazine.

Sayer continues: Confidence. If there’s one thing these new androgynous looks demand of men, it’s that. Which raises the question: have the über-masculine looks dominating menswear up to now been signalling a crisis of male confidence?

I agree that for a man to wear a skirt in public (or another seemingly feminine garment) requires an extra helping of self-confidence. Even someone with the credentials of David Beckham, adored for his masculinity by millions of women (and gay men) worldwide, came in for some flak when he wore a sarong. As I have mentioned elsewhere, we are not at all comfortable when our football heroes show any cracks whatever in their masculinity.

Sayer continues: But I’m willing to bet that, given some time, the public will come around to some version of this new unisex aesthetic.

Well, they might be helped by video games, as well as fashion. One of my longstanding favourite video game franchises is the Tekken series, which I have been playing since you could measure the size of the pixels with a ruler. Tekken and its sequels are beat-'em-up games, in which players control highly skilled martial artists and cause them to kick the stuffing out of one another. With each successive sequel, the characters have become more detailed.

Tekken games are basically like comics. They are marketed at adolescent boys (of all ages) and therefore contain what that demographic wants to look at: big, muscly men, and beautiful, scantily-clad women in revealing costumes (OK, so there are a few animals, robots, and demons in there too). From its first outing, Tekken featured characters like Nina, who fights wearing ridiculously impractical, skimpy outfits, stockings, and combat stilettos.

Enter the character Leo, introduced in Tekken 6. At first glance, with the jeans, the boots, the gloves and the stance (and the name!), we kind of assume that Leo is a boy, albeit a somewhat slight one. In the game, Leo is given no gender-specific pronouns, and none of the costumes reveal any part of Leo's body, so no clues there. We can't tell from Leo's fighting style; one of the aspects of Tekken is that diminutive teenage girls (such as Xiaoyu) can defeat hulking, Terminator-like robots (such as Jack), using only kung-fu. Yeah, good luck with that.

In fact, Leo is a girl, whose real name is Eleonore, though this fact only became official when her creator, Katushiro Harada, announced it publicly. Until then, fans of the game around the world were tossing coins to decide her official gender.

Most of the female characters in Tekken are exaggeratedly feminine; not just in their costumes, but in the little intro and outro animations played for each character. They wiggle their hips, shake their boobies, beckon in a sexual manner, or (in the case of the younger characters) adopt Lolita-like, little-girl mannerisms. Actually it's quite refreshing to find a female character who can wear something more practical to fight in than a bikini, and who doesn't flaunt their booty in front of the player.
﻿

Tekken is of course Japanese, and I suspect that many of the teenage girl characters are there to pay fan-service to the Japanese fondness for schoolgirls and Lolitas; nothing to do with setting positive role models for women, or even giving female players something to empathise with. I wonder whether Leo is there, not to transcend gender stereotypes, but to pander to some Japanese attraction to androgyny.

And what is it with our current fascination with androgyny? You can even find instructions on how to achieve it. Why do we (as a society) find androgyny so attractive? (And why do we find crossdressing so disturbing?). Just type the word into Google (or Google images) and be drenched in pictures of people blending the gender categories (with greater or lesser degrees of success).

In My Husband Betty, Helen Boyd writes (p.186) of how she and husband Betty attended a Hallowe'en party, with Betty dressed as Desire, an androgyne character from Neil Gaiman's Sandman: My husband is beautiful as a man or a woman, but unbelievably beautiful when he's something in-between. 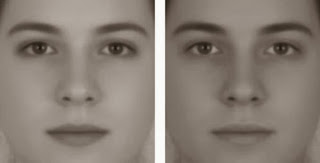 So there is definitely something in it, something intangible. I must say, when I look at the pictures of female bodybuilders, although some of them look really quite masculine, as well as feminine, I don't find it attractive at all. On the other hand, when I look at pictures such as that of Lucia Ianelli, above, I think: wow! How can I explain that? Is it because the bodybuilders look like lots of masculine plus lots of feminine, and the androgynes look like not much masculine plus not much feminine?

As for myself, is androgyny something I aim for? Not in the least. When I am male, I want to be completely male. When I am trying to be female, I want completely female. Somewhere in between doesn't really do it for me. But for those who can carry it off, I wish them nothing but the best.

What about the mainstream? Are men really going to go into stores and buy skirts?

Charlie Casely-Hayford (clothes designer): We want to challenge our customer, but we don’t want to freak him out. So every season, I’m asking myself – can we do a skirt? Will he understand? We’re almost there... But, you know, not quite yet.
Posted by Vivienne at 21:54