I was out one day in a sunny park with my children. As young kids often do, they formed instant but evanescent friendships with some of the other children. My youngest daughter was playing with another little girl with dark hair tied in bunches.

I always try to keep some sort of eye on my kids when they are in public places, and I notice other parents naturally doing the same. I caught the eye of the mother of this little girl, as she and my daughter came over to show and share their toys. It's OK, I was trying to mentally say, I'm a parent too. You don't need to worry.

When it came time to leave, I asked my daughter to say goodbye to her little friend. "What's your friend's name?" I asked my daughter. "I don't know, daddy," she said (How can they play all day without knowing each other's names? But they can!). The mother had come over, and was standing a little way off, smiling. "What's your little girl's name?" I asked the mother. But then she frowned, offended. "He's not a little girl," she replied. "He's a little boy."

I boggled. The child was wearing a sparkly top and corduroy jeans, and gym shoes. He had dark hair tied in bunches in the manner of little girls. Nothing in his behaviour had given me any clue that he wasn't a girl, and clearly my daughter had taken him for a girl. 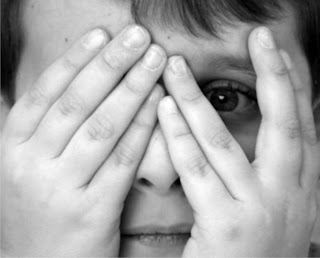 Speechless, I didn't know how to react. Why are you dressing your little boy like a girl? I wanted to ask. And assuming you know what you are doing, how can you possibly be angry when I don't recognise he is a boy? I am sure I am not the first person to make that mistake! I decided this might be one of the circumstances in which the Prime Directive applies. So we said a polite goodbye and left.

Later I mentioned these events to a colleague at work. "Was the mother Samoan?" he asked. I didn't know, but she did appear to be a Pacific Islander. "The child will be a Fa'afafine," he said. (Say it FAH-Fa-Fee-Nay, or at least he did). It turns out that it's culturally normal in Samoa to raise boys as if they were girls. But this wasn't in Samoa, but New Zealand.

I don't pretent to understand the cultural background or purpose to this behaviour. If she were really raising her boy as a girl, surely she should have accepted my reading of him as a girl and not protested? Unless in NZ it's illegal to overtly raise fa'afafine? It might well be, although I don't know. It might even be that the child isn't a fa'afafine, but just a boy whose mother likes sparkly tops and bunches.

According to Wikipedia, some fa'afafine resume the role of normal males in adolescence; some attempt to live as women in adulthood (and pursue sexual relationships with heterosexual men), while some seem caught in the middle, as a culturally-accepted third gender.

In May 2011, the Toronto Star reported the case of parents Kathy Witterick and David Stocker, who refused to reveal the gender of their third child, Storm. By the time I write this now, Storm will be about a year and a half old.


"If you really want to get to know someone, you don't ask what's between their legs," says Stocker. "What we noticed is that parents make so many choices for their children. It's obnoxious."

Stocker and Witterick are trying to allow Storm to make his or her own way in the world, unencumbered by the expectation that a chosen, binary gender imposes on him or her. (I know lots of people really well, and I must say I have never felt it necessary to ask what's between their legs!)


"Please can you just let Storm discover for him/herself what (s)he wants to be?!" writes Witterick.

The Toronto Star article provoked a storm of protest. If you've read my other blog posts, you will know that it looks like one of the biggest hurdles they will face raising Storm in this way will be their constant agony over which pronouns to use! Imagine how hard they must be trying not to give the game away with a careless use of a specific pronoun.

In the case of the woman in the park, she is dressing her boy in such a way that he appears to be a girl. I don't know if she otherwise treats him like a boy, or whether he is expected to behave like a girl at home and is only given girly toys. I can't help feeling this is an extremely harmful thing to do. Kids have enough uncertainty in life, without wondering: why does my mum dress me like this instead of like the other boys in my kindergarten class?

For the parents of Storm, I understand the point they are making, and their need to make it forcefully by refusing to reveal Storm's gender to the world. On the other hand, children need some sort of structure: they can't simply choose the way the world works for them. As one mild example, my kids don't want to eat their vegetables, brush their teeth, learn their times-tables or even say please and thank-you. I regard these activities as more or less essential, but if I gave my children the choice, they would not do them. It doesn't trouble me one whit that Stocker thinks that's obnoxious! Likewise, I think I owe it to my kids to give them some sort of moral framework with which to interpret the world. As they get older they will (as I did) learn which parts of that framework to keep, and which parts to discard.

For what it's worth, we have always provided a mix of toys for our kids: they can play with the Lego and the trucks, or the toy kitchen and the dolls, whenever they want. In addition, we try to make sure that all our kids can come for a cuddle (or otherwise express vulnerability) whenever they want: they are never told to be "big brave soldiers" (as I was!).

Two things, I think, will confound both sets of parents. First, the personalities of the children involved. I believe personality is innate and cannot be modified, not even by gender-non-normative parenting. We might find that Storm decides quite rapidly whether she wants to play with the trains or whether he wants to play with the dolls' house, and expresses that preference repeatedly. (And the minute this happens, s/he will immediately cease to be newsworthy in any way! Shock: Small boy plays with Nerf Guns!) Likewise, the child in the park might start to assert his masculinity more clearly than his mother wants, especially after he starts school and starts to meet more traditional boys. I do fear for both children how their peers will react: I hope they will react with acceptance (and we raise our children to be accepting of all their peers), but they may react with cruelty or ridicule. That's no laughing matter.

Secondly, whatever parenting does, it can't hold off adolescence. It might be quite hard for Storm to keep his place in the rugby team when his periods start, or her place in the netball team once her voice breaks and she starts sprouting a beard. And the child in the park will declare himself to be a man eventually. No amount of paternal wishful-thinking can overcome the inevitability of adolescence, or the tendency of almost the entire human race to see ourselves as having only two genders.

Georgia at BroadBlogs has blogged about Storm here. The article is interesting and has a different angle from my own, and I also refer you to the wonderful X: A Fabulous Child's Story.

For more about this topic, I have written a continuation post here.
Posted by Vivienne at 21:51