Picture a scenario. It's Friday night. You're in New York. You're a fashionable, wealthy, metrosexual crossdresser-about-town. You get your finest frock on, get all glammed up, and go to the theatre. And to remind you of what a lovely time you had, you get your picture taken.

You might be forgiven for thinking that was a very modern-day scenario, but in fact, this sort of thing has been going on for a lot longer than you might think. Although the trappings seem pretty familiar, this scenario is three centuries old. The individual at the centre of this particular event is Edward Hyde, 3rd Earl of Clarendon, Viscount Cornbury, who is known to history as Lord Cornbury. 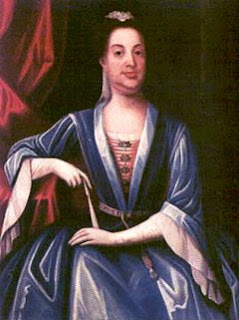 Cornbury is an interesting chap. He was an English nobleman, born in 1661. He seems to have pursued a wide succession of careers: an army officer here, a member of Parliament there, but not made much out of any of it. Finally, he was made Governor of New York and New Jersey in 1701, at the age of 40. History reports that he was probably the worst Governor ever imposed on an American colony by Britain, and in winning this accolade I dare say he had some serious competition.

The following have all been written about him: "arrogance, joined to intellectual imbecility", "a degenerate and a pervert who is said to have spent half of his time dressed in women's clothes", "a fop and a wastrel". It was reported that he, while cross-dressed "lurked behind trees to pounce, shreiking with laughter on his victims", although it's not clear what fate then befell those victims.

Robert Livingston observed that "his dressing himself in women's clothes was so unaccountable that if hundreds of spectators did not daily see him it would be incredible". Lewis Morris wrote back to the Secretary of State to complain of "his dressing publicly in women's cloaths every day", and clergyman Elias Neau wrote that the Governor "continues to dress himself in Women's Cloths, but now 'tis after the Dutch manner," implying he had an eye for the fashions of the time. He was reported to do his business while cross-dressed, and "sitting at the open window so dressed, to the great amusement of the neighbours". It's clear that some of these commentators were angered, and others perplexed, by this behaviour, and as a detached observer, I can't help thinking that his behaviour does seem to be outwith the normal duties of his office.

So Cornbury seems to have been a pretty unpopular fellow. His term of office lasted only until 1708, and he ended up in a couple of other positions without further distinguishing himself. He married in 1688 but produced no known children; perhaps his wife thought of him in the same way seemingly everyone else did, although it was reported that he was devoted to her. (It was also reported he attended her funeral wearing a dress).

On that sultry New York night, he must have left his mobile phone at home, for instead of taking some intimate shots in the back of a cab, he required to sit for a portrait to be painted. And here he is. The artist has probably taken some liberties (look at that fashionably narrow waist and those elegant wrists), but I expect the face is quite realistic. Artistic scholars seem to agree that the portrait isn't intended to be a caricature.

Just to be clear, Cornbury is only one in a very long line of English aristocracy doing very strange and questionable things, using his money and status to silence the objectors. A more recent example concerns Sir Peter Viggers, who built an extremely ornate duck house on an island in his country estate. That's merely eccentric. The bit everyone objected to is that he had it paid for by claiming it as a legitimate Parliamentary expense. The ensuing scandal cost him his seat in the House of Commons, but at least now he can spend more time at home with his ducks.

So I am not holding Cornbury up as any sort of paragon, or example to the rest of us. But I do mention him here as an interesting historical figure. It's clear, among other things, that he was a transvestite in a very traditional sense; he was "out and proud", and enjoyed his dressing very much. He liked to take pictures of himself to show other people. He even amused his neighbours, something some of the rest of us might be familiar with.

But the story doesn't end there. Recent scholarly activity suggests that his reputation as a transvestite might have been cooked up by his critics as a means of getting rid of him, and the New York Historical Society, where the above portrait hangs, say there is no reliable documentation of either the artist or the subject. I personally think that there is so much commentary of his cross-dressing, over so many years, that there must be at least a kernel of truth under it all.

But if that painting isn't Lord Cornbury, then who is the man in the portrait in the low-necked blue evening gown?

My thanks to my correspondent Grok for drawing my attention to the existence of The Cornbury Society, a crossdressing social group based in Vancouver. The society takes its name from Lord Cornbury. From its website, the society looks quite a lot like the Beaumont Society, right down to taking its name from a famous historical crossdresser.