Here's something I found really interesting. I came across this blog, Healing from Crossdressing. Why did I click on it in the first place? Because the title caught my eye: crossdressing is damaging to me, and perhaps a little healing is in order. However, my first impulse was to move on immediately: blogger Thorin, a Christian pastor who is also a crossdresser, starts off pretty heavy on the religion. 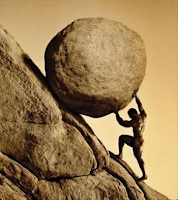 Just to be clear, though I was raised with a strong Christian background, I am very unsure about God. Even if he is up there, I feel pretty strongly that this is the way he made me: a man with a large spoonful of woman mixed in the recipe. If you really want to get all biblical about it, crossdressing is for me like Paul's thorn in the flesh: it's something which afflicts me daily, and against which I have to struggle. I don't however think crossdressing is inherently sinful or wrong in any moral sense.

I stuck with Thorin's blog a little further, and read several of his posts. Thorin is a smart guy; he is articulate and he has great emotional awareness. He admits with startling frankness the effect crossdressing has had on his life and marriage. He is very forthright about his experiences with the internet (crossdressing fiction and photographs). And he, like me, is struggling to keep crossdressing from overwhelming him. He has managed to keep it at bay using prayer and scripture, for which I wish him nothing but success. But where I am yearning to do it, he is yearning not to do it (or perhaps more importantly, yearning not to have the desire to do it). But Thorin and I have a lot in common, not least a recognition that dwelling on crossdressing takes emotional energy away from more important things (like family). And we share the urge to not bottle up our feelings, but to blog about them as a means of crystallising our views, seeking insights, and reaching out to other people who might feel similarly.

From Thorin's blog, I clicked onto one of his links, and found myself reading about Ralph in a Dress. Ralph is, if anything, closer to my viewpoint than Thorin. He writes:

Instead, the bloggers I have the most in common with are the ones who, for personal or marital or spiritual reasons have decided to quit crossdressing entirely. They understand that “if it feels good, do it” is a self-destructive philosophy; they understand the importance of limits and self-control and taking responsibility for your actions, your family, your job.

Perhaps for these reasons, Ralph's blog is pretty quiet. He has only made one post this whole year, and that one a cartoon with only a short caption.

Ralph's viewpoint is the closest I have come to-- so far-- which echoes more or less exactly how I feel about crossdressing. I have posted before how I think that openly pursuing crossdressing is likely to be harmful to my marriage and my family, and that boils down to a simple choice: either crossdressing rules me, or I rule crossdressing. Actions have consequences.

Where we differ is that I am trying to look for ways to make crossdressing OK (while admitting inwardly that I expect it never will be completely OK). Whereas Ralph and Thorin (and others) are trying to reject crossdressing from their lives: in effect making it not OK all by themselves.

But how can this be? That the people on the blogosphere I have most in common with are the ones who are trying hardest not to do it?
Posted by Vivienne at 22:11