A couple of weeks ago I was listening to Thinking Allowed, a BBC podcast by the sociologist Prof Laurie Taylor. At university I found sociology among the most unstimulating of subjects. There was a graffito in the students' toilet next to the loo paper: it read Sociology Degrees: Please Help Yourself. When I first started listening to Thinking Allowed some years ago, I was fascinated by it, without realising that its core was sociology! Since then I have been devoted and, thanks to podcasts, never miss an issue. The programme is insightful, interesting, often funny and occasionally heartbreaking. Once in a while it tackles controversial topics unflinchingly. There is an extensive archive here, to which you can listen for free, and the specific podcast can be found here.

On this particular episode, Laurie's guest was Christena Nippert-Eng, who is Associate Professor of Sociology and Acting Chair of the Department of Social Sciences at the Illinois Institute of Technology in Chicago. She was discussing her new book, Islands of Privacy, which discusses the nature of privacy among "oceans of accessibility" around us. For each of us, there are things which we really want to keep private, and particular personal reasons why some things are kept "private" and some things "public", and some things are in between. I found this subject very interesting, and couldn't help applying some of her theoretical questions to myself, such as "How would it affect me if I lost this object and somebody else got hold of it?" In addition, Nippert-Eng was a warm, animated, and highly articulate speaker; a pleasure to listen to.

I haven't yet read her book, but it's now in my in-pile. You can find out more about the book here. 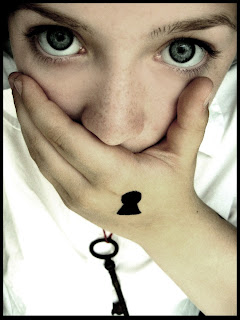 In addition, she points out each of us "manages our identity in front of other people (what Goffman called "impression management"). We are trying to present a certain image of ourselves to ourselves, and to all these other people around us. If you deny people privacy, you deny them the capacity to control what is known about them to other people, and to shape their identity in a way that they would like it to be."

I thought how much this resonated with me. As a crossdresser, I have many secrets (as I suspect many of us do). I expend considerable energy concealing that fact from other people, both verbally and in other ways. And I try very hard to create an identity for myself which is "acceptable" and "presentable" to the world in which I live. And yet, here I am, attempting to reveal aspects of myself on the Internet: surely the least private thing in the world! I am certain this blog is a safety-valve: it is one way of letting out just a little of the pressure it takes to contain my own secrets. In addition, as a scholarly type, I have always found that words are a very good way to crystallise my feelings.

Let's look from the outside. I am a professional, family man. I have a responsible job at a moderately prestigious institution. My professional reputation is good. I recycle. I give to charity. I don't drink heavily. I don't gamble. I don't have noxious habits. I don't even play golf! I have a house in the suburbs of my city, which is pretty similar to lots of houses around me. Most of the time, I am happy to do manly things: I chop trees, I ride my bike over mountains, I fix my car. I do dad stuff and husband stuff and supportive, pillar-of-the-community stuff and sociable, salt-of-the-earth stuff. It is easy to be that man, most of the time. I am not pretending to be this person: I am him (OK, technically I am he, but let's not split grammatical hairs).

When I look around at the other guys I know, I believe that none of them remotely suspects that I am a crossdresser; not my best friends, not my workmates. My wife knows (of which more later). Two very supportive friends looked after me once when I fell to pieces in their kitchen and confessed it all (the friendship endures but they have never mentioned the episode, or the crossdressing, since). And one friend once confided in me that he was struggling at work because he is gay, so in a quid-pro-quo moment, I told him. Unfortunately he moved away and we are seldom in touch now.

Now let's look from the inside. Inwardly, I long to express some aspect of femininity more or less constantly (there are some short respites from time to time). But this is where the problem begins: this is just not OK. My wife (who, let's be clear, is beautiful and funny and generally brilliant) just can't bear the notion that her husband is a crossdresser. We've tried a series of coping strategies including marital counselling, which hasn't made much difference (though I believe it saved our marriage). What she wants in a husband is 100% "man", and instead she has someone who is about 95% "man" and 5% "woman" (maybe; see my other post here for more discussion of this).

From her perspective, crossdressing is fine, provided I (1) tell no-one about it, (2) don't ever mention it, (3) do it alone, at home, with the phone off the hook and the blinds down. In all fairness, it's not that she hasn't seen it: she has come with me to one or two crossdressing social events, and has accompanied me to a couple of makeovers. I can't in all honesty say that she hasn't had a look at it. But she has only observed these events, not participated in them, and afterwards, when all I want to do is to talk about it, she sits in silence, and gets angry (or maybe angrier) when I try to bring it up later.

So why don't I just accept that? Well, there are loads of reasons. First, I am not very good at crossdressing. To look good as a woman requires a lot of practice; ideally an entire adolescence spent experimenting with every beauty product on the market. Though I watch women closely (using every erg of cognitive power I can muster) I just haven't got it right: the clothes, the cosmetics, the whole package still looks a bit weird. What I really need is a bit of help to get the basics right, then I can work on the fine tuning. That's where I keep hoping that she will come in, even though I accept she never will.

Second (and much more importantly), for me, crossdressing is an intimacy. It's about expressing the most sensitive, emotional and vulnerable part of me (the part I keep hidden deep down when I am in a leadership role, metaphorically roaring and beating my chest in front of the other silverbacks). I don't want to express that alone, and I certainly don't want to express it in front of strangers. I have no desire to take that intimacy anywhere outside my marriage. But I wish that my wife would recognise that as a good thing and share it with me!

But my family and my marriage are the most important things in my life. It is more important to me to be a husband, and a father, than it is to be a crossdresser. So I keep it hidden, and keep my mouth shut about it.

What would happen if my work found out? Well, I wouldn't lose my job: my institution has an Equality and Diversity programme. My colleagues would laugh at me, of course, and there would be a series of subtle shifts between some people I now get on with who would gradually turn their backs (stop inviting us round, stop bringing their kids to play), and some people I don't get on well with now who would unexpectedly be supportive or unchanged. I could cope with that, I suppose.

What would happen if the kids found out? At the moment they are young enough for it probably not to be that much of a big deal. They all enjoy playing dress-up. I don't think they would love their dad any less for it. (I am certain that my wife would view that situation with horror). But I do worry about what would happen if the other kids at school found out. Kids can be really cruel to each other, and all it takes is one tiny stigma for the bullying to start. It's tough enough to grow up without having to deal with daily taunts about your father's underwear predilections.

So, just like Nippert-Eng suggests, my secrecy about crossdressing is a deliberate choice. It's not that I lack the confidence to crossdress publicly and happily. It's not that I lack the wherewithall to accomplish it either (a bit of judicious expenditure and some careful practice would work wonders). But actions have consequences. Having considered those consequences extremely carefully, I think that the situation as it stands is the least painful. But it's still painful!
Posted by Vivienne at 12:34